In 1888 Richard Warren Sears and Alvah C. Roebuck released their first catalog.  A catalog that would come to represent the great revolution of the American Dream for the next century.   A simple watch handler was able to provide affordable and available products to farmers in rural areas that did not have the option of price negotiations or product choice in their very limited and tiny general shops.

Precisely as Sears did to so many small rural general stores, so has Amazon done to retail giants.  But could there be an opportunity for Amazon to play their part in repaving the shaky mortar of two of the most historic founding retailers of the American Dream?

The Problem with the Wal-Mart Proposition

The Wall Street Journal reported that Amazon is looking to expand their reaches even further with their grocery concept Amazon Go.  The addition of a grocer will add some departments that Amazon have yet to tread, such as produce.  To cut cost the retail giant is reaching out to the very competition that it has reeked havoc on financially for nearly two decades.  Surprising no one, Target and Wal-Mart have turned down the offer to allow Amazon to infiltrate their businesses in order to expand its own at a lower cost.

Why is Amazon Looking To Cut Corners?

According to WSJ, through the combined costs of their offerings of free shipping through Prime memberships, and the issues of unsold product belonging to their merchants in their warehouses, Amazon reported losing 11.7% of their revenue in the third quarter, this is a jump from the 10.4% lost last year.   So if they were able to cut out UPS and Fed Ex all together , this would make a remarkable leap forward in the actual profitability of Amazon.

As a result, Amazon has decided to dabble with their own shipment center.  This will keep out those pesky shipping charges from UPS and Fed Ex, and offer a new alternative to the rest of the world.

So What Does This Have to Do With Other Retailers?

In order for their investment to pan out they must be able to fill their trucks.  Successful shipment centers require volume and although Amazon has a giant footprint, partnering with another grocer will help them not only expand their demographic but also fill their trucks.  A full truck makes far more money than an empty one.

But wait…what about K-mart?

While Wal-Mart and Target are the titans that will manage to maintain their edge against Amazon’s upcoming technological advances, K-mart will only continue to fall further behind if they continue the path they are on.   They are still scattered across the US at a surprising 801 locations as of October 2016.  Combined with Sears, who they also own, that accounts for 1500 locations across the America, just missing the 2,000 mark that Amazon projects to be aiming for.

If they teamed with Amazon, this would give K-Mart the technological boost they do not appear to have nor the resources to establish; as well as decreasing their shipment costs.  As part of the partnership it would only be natural to give Amazon its own Department, then making K-Mart a destination.

But K-Mart does not come empty handed; with K-mart is the more rural demographic that are not yet lifelong Amazonians. 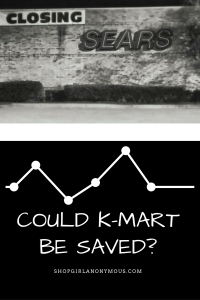 Have efforts been made to reach out to Kmart?

Nothing has been reported as of yet.  Though an extended arm to the company that was started j
ust as a five and dime in Memphis, TN by a traveling sales man in 1897 would not only save Amazon money, but also serve as possibly repairing a fraction of the mayhem and damage they have caused to so many retailers.

Imagine it, the villain turning knight through one simple business negotiation.  Preserving the original American Dream, while they continue to conquer their own.

15 thoughts on “Who could be Kmart’s Unexpected Hero?”

There was an error retrieving images from Instagram. An attempt will be remade in a few minutes.

Keep Up With the Retail Gossip

Keep Up With the Retail Gossip